Decatur County’s wooden covered bridge, located 1.5 miles southeast of Westport just off County Road 1100 South, is the only covered bridge ever constructed in Decatur County. It’s a Burr Arch and Truss type twelve panel bridge spanning 115 feet across Sand Creek with 7.5 feet extensions at each end to help protect interior timbers from the weather. Its interior clearances are fourteen feet tall and fourteen feet, five inches between the arches.

On July 20, 1880, the County Commissioners awarded a contract to A. M. Kennedy & sons, of Rush County, to build the bridge at $16.00 per foot. The next day, July 21, 1880, the Commissioners contracted with E. S. Bussell & Brothers to build the stone abutments. This covered bridge is one of only 11 remaining Kennedy bridges. It carried traffic for a major roadway east from Westport, of up to 5 tons, for nearly a century until in 1976 it was bypassed and closed to all but pedestrian traffic. Its loads varied widely, from pedestrian foot traffic, to horse drawn buggies, wagons and farm machinery, to steam powered farm equipment, to more modern vehicles including automobiles and grain trucks and farm tractors pulling heavy equipment. No doubt, its loads sometimes strained its structural members mightily, but it’s stood strong and majestic for these 130 plus years.

On June 25, 1982, the United States Department of Interior entered the Westport covered bridge on the National Register of Historic Places.

The covered bridge originally was completely enclosed, as seen in the picture below. At some time, probably in the 1930’s, side windows were installed in half the length on each side at opposite ends so that oncoming traffic could be seen, because the road turns quickly at each end. Later, probably in the early 1950’s, the windows were extended the full length of the bridge.

The photograph to the right shows the west end of the covered bridge amidst the 1913 flood. Local residents were almost certain that it would be swept away in the flood waters. The water was lapping against the siding while a strong stream current overflowed the road at the west end. Again in a flood of about 1958, a local resident recalls walking across the bridge in knee high water while helping a family evacuate from their home. But, each time it’s been threatened by high flood waters, the bridge has held fast. 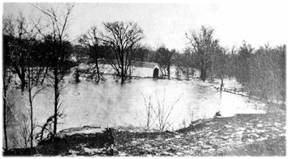 The bridge is constructed such that there are twelve truss panel members sandwiched between two arches on each side of the bridge. You may see the vertical truss beams with the angular strength members above. The truss panels support the bridge structure: the floor, the running boards, the walls and the roof. The arches are segmented and overlapping timbers and are the primary load bearing members that support both the bridge structure and any load the bridge may carry.

Exactly when, since its construction, any repairs were made, or their extent, is not known. However, the most recent refurbishment began in the summer of 2003. The County Commissioners obtained a Federal Highway Transportation Act grant as the major portion of the $450,000 total project cost to renovate and preserve this architecturally and historically significant covered bridge for current and future generations. Evidence existed that repairs to the ends of the arches had occurred probably twice before. On the east end, the ends of the arches were repaired by sandwiching new timbers on either side of the old rotted arch ends. On the west end, the ends of the arches were cut off and blocks were installed between the arch ends and the abutment. In one area of the floor, a panel length long, the floor joists had been replaced with steel I-beams.

The refurbishment project included replacing the deteriorated end pieces of the arches at each end of the bridge. Vegetation was removed from between the stones of the abutments and the mortar was replaced and repointed. The longitudinal stringers, the floor joists, and the floor boards were increased in size to meet federal requirements for traffic loads. A new metal roof was installed. The weatherboarding was replaced and painted the original color. The square end openings were restored to their original curved corner configuration. The missing scroll work was reproduced and painted the correct green color. The completed covered bridge stood proud and beautiful.

Westport was sponsoring the “Westports of the World” convention; what better time to re-dedicate the bridge. On August 14, 2004, the Decatur County Commissioners, in the presence of local residents and Westport delegates from New Zealand, Ireland, Canada and several other states from within the United States, re-dedicated the Westport covered bridge.

Immediately afterward, drivers who had paraded their vehicles to the covered bridge were permitted to drive across it, one at a time, led by Commissioner Tom Menkedick transporting the other Commissioners in his antique 1957 Chevrolet followed by Bob Conwell in his antique 1927 Ford Model T truck. Today, the covered bridge is open to travel across it at any time, with vehicle and passenger weight limited to 4 tons. People come from all across Indiana and surrounding states to study the bridge’s construction, to admire its simplicity and to marvel at the ingenuity displayed from a time so long ago. On the first weekend of every month, the Covered Bridge is illuminated inside and out.